We all have had our giggles on Neymar and his injuries this FIFA World Cup right? Kinda cliché isn’t it? Not interesting. Now what if I tell you that we’ve had robots rolling and tripping the same way as Neymar did, the last weekend. From shouting out respective hall names to blaming the team’s bot controller for making silly bot controlling mistakes in the match; from winning the matches by 16-2 to losing them by 3-4 in the last minute; from pushing the opponent’s bot out of the arena to hitting the opponent’s bot so hard that it gets broken down; it has all been a fun and learning experience after all. Yes all this happened during the Robosoccer competition organised and hosted by the Technology Robotix Society on the 26th of August 2018. 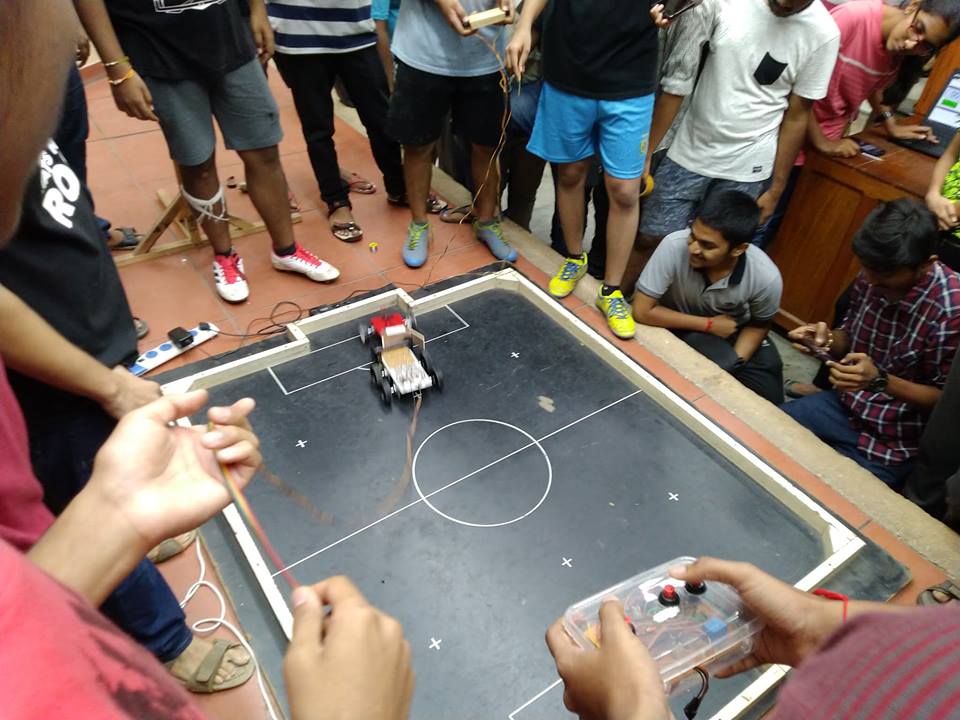 The Robosoccer competition was the first technical event exclusively held for the freshers who made their first ever bot with at most enthusiasm and huge participation. It was basically the freshers’ first milestone in the world of robotix. The problem statement of the competition was to build a manually controlled bot working on the differential drive mechanism whose aim was to play one-to-one soccer matches against the opponent on a small arena using a golf ball. The design of the chassis and the bot included basic features like two or four motor driven wheels and arms to control the ball, and innovative features like flippers, kickers, slopes and tapes. The bot was manually controlled by one or two of the team members using a wired controller. The circuitry was based on either a DPDT circuit or a relay circuit. While the DPDT circuit was easier to make but difficult to control, the relay circuit was a bit difficult to make but easier to control. The participants were given basic tutorials and hands-on on how to build their bot in the induction workshop as well as informative sessions like the KRAIG 101. The bot was supposed to score as many goals as possible and to defend the opponent as well in a three minute match. The teams were supposed to change sides after a half-time of one and a half minutes. The event was organised in teams of three, and the matches were played on league basis initially and knockout basis in the further rounds. 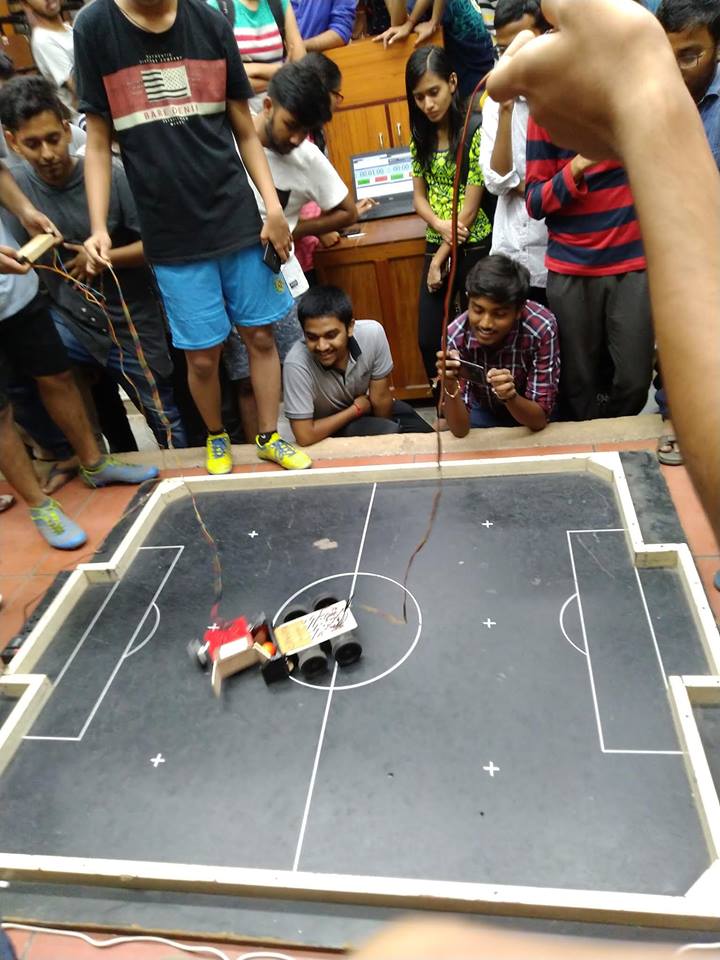 There were matches where the design and control of one of the bots was so robust that the team won by a margin of more than 15 goals, while there were matches where the leading team changed sides a lot of times during the match and it was difficult to predict the winner even till the last ten seconds of the match. The way the team members and the supporters cheered for their teams, and the way the controller controlled the bot with full concentration and hand-eye coordination was an amazing experience overall. One of the most amazing things during the competition was the way small two-wheeled bots competed against large four-wheeled bots, which obviously had an edge due to the torque that four wheels provide over two wheels. No matter how robust the design of the bot was, the game slowly came down in the hands of only those teams which were perfect at controlling the bot and the ball on the arena. After cut-throat competition amongst the teams, the competition was finally won by the team with the most robust bot design and an unbelievably amazing control of the bot, Team Enigma with Ashish, Parth and Alok as it members. Team Jugaadoos and Team Mutants were declared as the 1st and 2nd runner up. 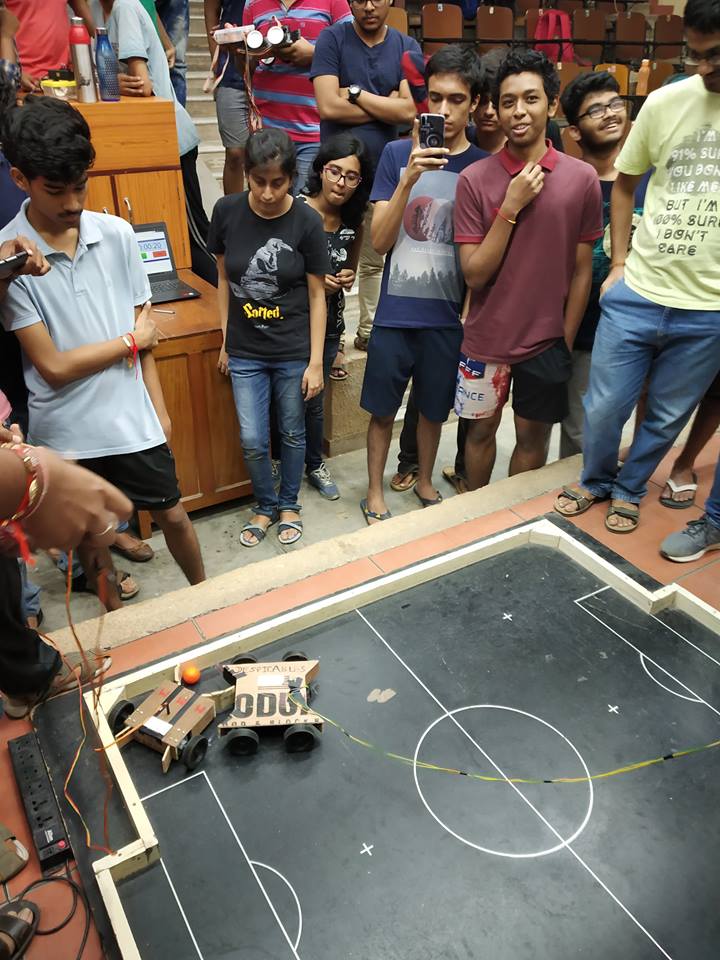 One of the key features of this year’s Robosoccer competition was that it was live-telecasted on the official Facebook page of the Technology Robotix Society. The participants were so eager to show off their bot and their skills that a lot of them told their parents to switch on the live video to show them how they’re playing and to get a feel of how things are done here at IIT Kharagpur. The matches began getting so interesting and unpredictable towards the end and the participants’ tempo was so high that even the Sub Heads and the Heads of TRS who were present there started feeling nostalgic about their own Robosoccer competition which they had participated in during their fresher year. 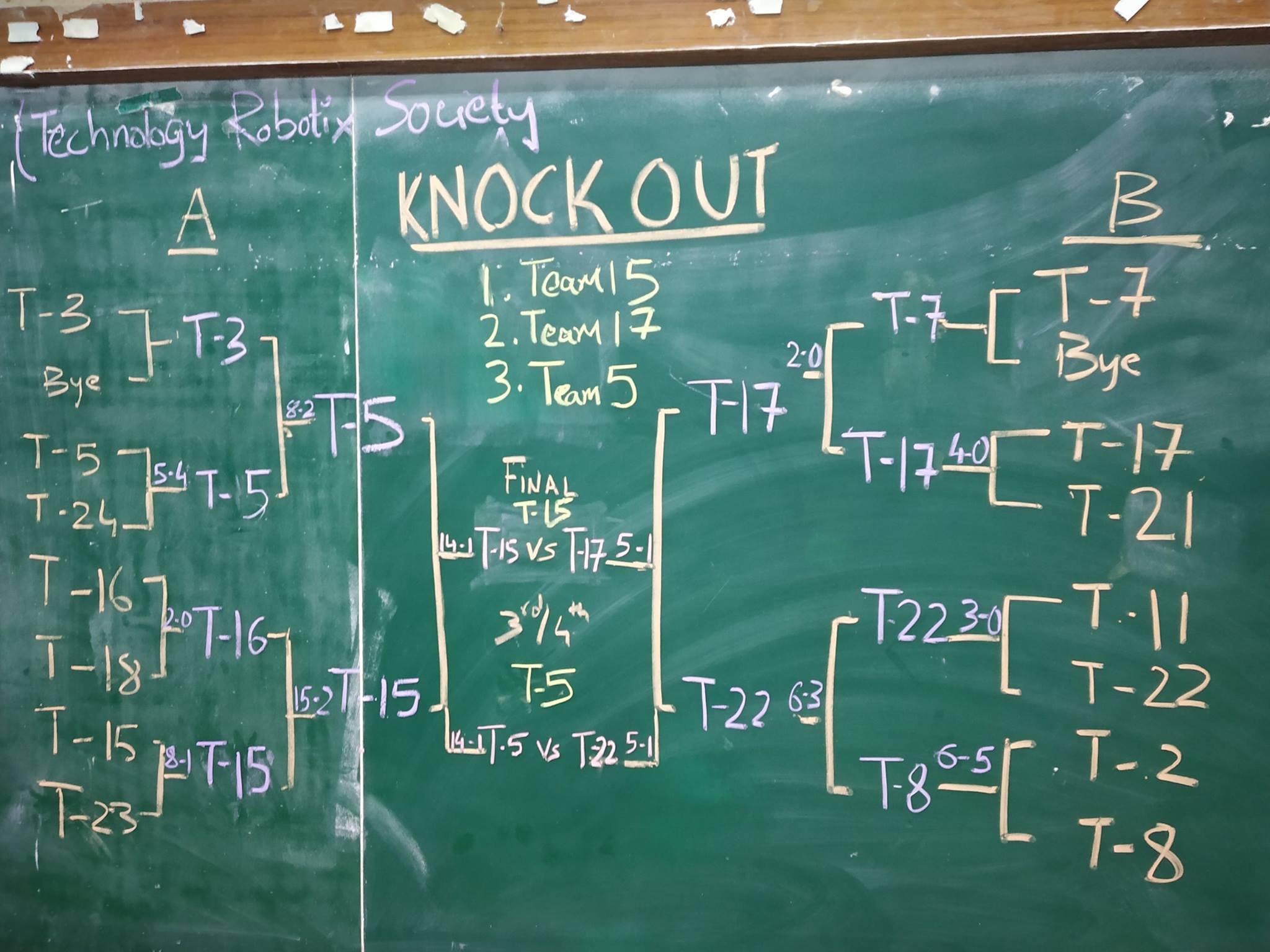 A lot of teams won, a lot of them lost, but what’s more important is what the participants took back home from this event. From learning the technicalities of the robot, to mastering it’s control on the arena; from making their own first bot to helping others debug their bots; from trying their best to win the competition, to cheering others to try harder; it was an overall fun and learning experience in its true sense. The event wouldn’t have been possible without the efforts of the Sub Heads and the new members of the Technology Robotix Society.

Cheers to them and to the participants!