What Is Motor Driver IC?

A motor driver IC is an integrated circuit chip which is usually used to control motors in autonomous robots. Motor driver ICs act as an interface between microprocessors in robots and the motors in the robot. The most commonly used motor driver IC’s are from the L293 series such as L293D, L293NE, etc. These ICs are designed to control 2 DC motors simultaneously. L293D consist of two H-bridge. H-bridge is the simplest circuit for controlling a low current rated motor. For this tutorial we will be referring the motor driver IC as L293D only. L293D has 16 pins, they are comprised as follows:
Ground Pins - 4
Input Pins - 4
Output Pins - 4
Enable pins -  2
Voltage Pins - 2
The workings of the individual pins are explained in detail, later in the tutorial.

Why We Need Motor Driver IC?

Motor Driver ICs are primarily used in autonomous robotics only. Also most microprocessors operate at low voltages and require a small amount of current to operate while  the motors require a relatively higher voltages and current . Thus current cannot be supplied to the motors from the microprocessor. This is the primary need for the  motor driver IC.

L293D And Its Working

The L293D is a 16 pin IC, with eight pins, on each side, dedicated to the controlling of a motor. There are 2 INPUT pins, 2 OUTPUT pins and 1 ENABLE pin for each motor. L293D consist of two H-bridge. H-bridge is the simplest circuit for controlling a low current rated motor.
The Theory for working of a H-bridge is given below.

Working Of A H-bridge 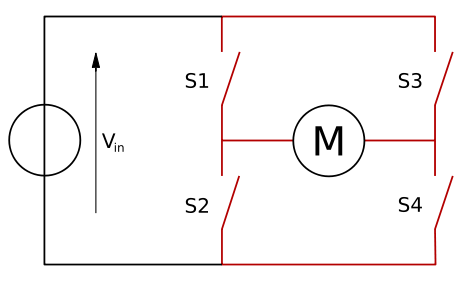 In the given diagram, the arrow on the left points to the higher potential side of the input voltage of the circuit. Now if the switches S1 & S4 are kept in a closed position while the switches S2 & S3 are kept in a open position meaning that the circuit gets shorted across the switches S1 & S4.  This creates a path for the current to flow, starting from the V input to switch S1 to the motor, then to switch S4 and then the exiting from the circuit. This flow of the current would make the motor turn in one direction. The direction of motion of the motor can be clockwise or anti-clockwise, this is because the rotation of the motor depends upon the connection of the terminals of the motor with the switches.
For simplicity, lets assume that in this condition the motor rotates in a clockwise direction.
Now, when S3 and S2 are closed then and S1 and S4 are kept open then the current flows from the other direction and the motor will now definitely rotates in counter-clockwise direction
When S1 and S3 are closed and S2 and S4 are open then the ‘STALL’ condition will occur(The motor will break).
Stall Condition:
When the motor is applied positive voltage on both sides then the voltage from both the sides brings the motor shaft to a halt
L293D Pin Diagram : 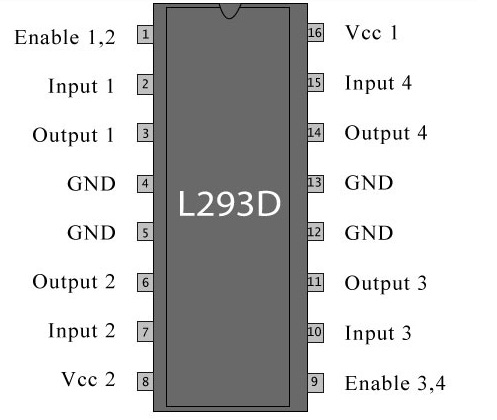 In the above diagram we can see that,

Soldering On A PCB

Given below is the circuit diagram for how the IC needs to be soldered on a PCB with the connectors.

From a six pin relimate INPUT 2, INPUT 1, ENABLE 1-2,ENABLE 3-4,INPUT 3 and INPUT 4 are given.
The inputs to the DC motors are to be given through a two pin relimates whose connectors is shown in the left and right side of the figure.

Why 4 grounds in the IC?
The motor driver IC deals with heavy currents. Due to so much current flow the IC gets heated. So, we need a heat sink to reduce the heating. Therefore, there are 4 ground pins. When we solder the pins on PCB, we get a huge metalllic area between the grounds where the heat can be released.

Why Capacitors?
The DC motor is an inductive load. So, it develops a back EMF when supplied by a voltage. There can be fluctuations of voltage while using the motor say when suddenly we take a reverse while the motor was moving in some direction. At this point the fluctuation in voltage is quite high and this can damage the IC. Thus, we use four capacitors that help to dampen the extreme variation in current.