Grid solving robots are very useful in various robotics competitions. In this tutorial we would be dealing with how the grid follower robot works along with its algorithm. A grid follower is basically a line follower with a modified code which helps it in traversing a grid. Just as a simple line follower, a grid follower takes inputs from various sensors to detect its position on the grid.

The robot will consisting of two parts

The sensor will be basically a light detecting sensor. We here are using the property of absorption. We all know that black surface tends to absorb all the light that falls on it. So, we place a LED(Light Emitting Diode) along with a LDR(Light Dependant Resistor) as our sensor. Suppose that our sensor is hovering upon white surface. White surface reflects more than black. Therefore, more light would be reflected on LDR and thus, its resistance would change and we can predict accordingly that the sensor will be upon white surface. When it will be hovering upon black surface, less amount of light will be reflected and so we can predict that it is over the black surface. 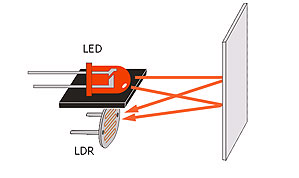 We can use IR sensor too instead of LED-LDR sensor. 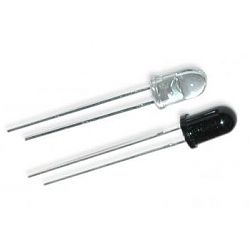 The Robot will be a simple line follower with additional sensors for finding nodes in the grid (Node is basically an intersection between two lines). So there will be some sensors for line following and some sensors for node detection.
–0-0-0-0-0–
|           |
|           |
|           |
0–[M]         [M]–0
|           |
————-
The above figure shows the robot along with sensor placement. The sensors are shown by “0” and the motors in the robot are shown by “[M]”. Basically the Grid follower robot will have line follower part (which includes the front sensors) and node detector (which includes the sensors parallel with motor shaft). The Grid follower has to basically follow line when it is not on a node and when a node arrives it has to decide whether to take a left or right depending upon the final position it has to reach.

The line follower is explained in another tutorial. Basically it deciding which motor to run depending upon the locations of sensors. In our code one function is made which uses the line follower algorithm.

The Hardware Part of the Robot

As we have already discussed where to place the sensors on the bot, now we will talk about its connections with the microcontroller.
The sensor will give output in the form of analog-voltage. This voltage has to be compared with some threshold voltage to decide whether the concerned sensor ie either on white or black. For this there are two methods: